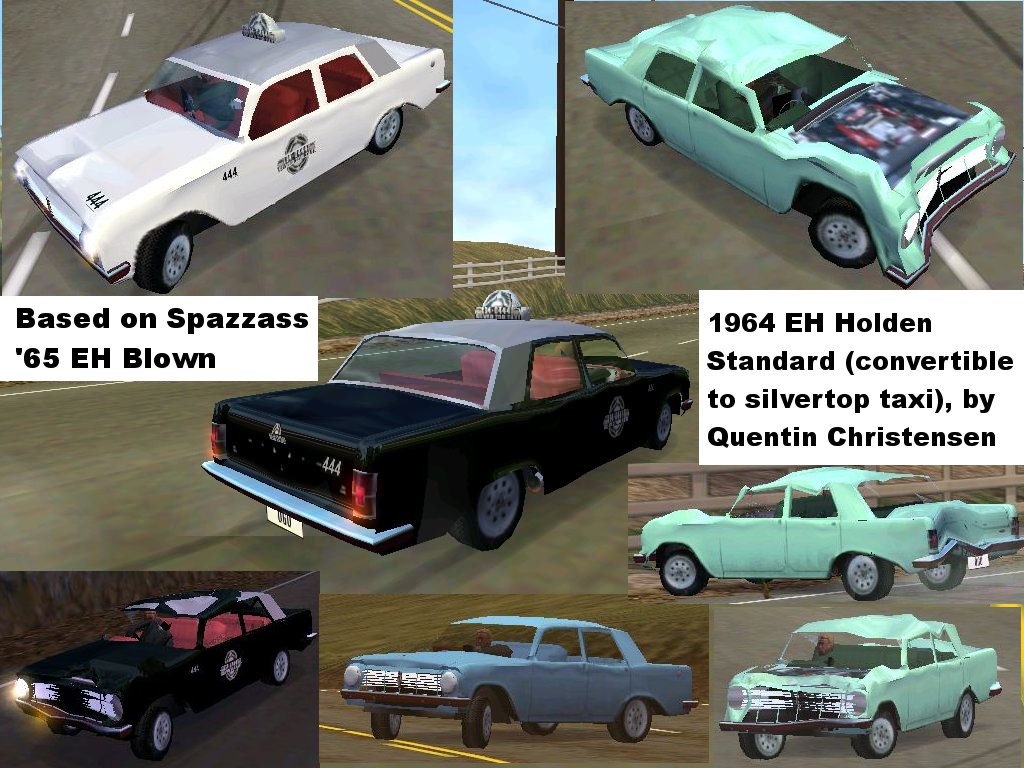 I've tried to turn Alex's blown and lowered 2 door EH 'back' into a more stock 4 door EH. I've also given the car, chrome strips, factory paint job, damage, a convertible option to turn it into a Silvertop taxi (from Melbourne Australia). I started to make a dash view, but I just couldn't get the hang of it, so I apologise for it's lack of inclusion.

with 294 triangles and 234 vertices being used in the convertible part.

I had a play with the carp.txt to try and make it realistic - I'm not sure if I've managed that, but it's fun to drive (I did discover this morning when playing around that I can do 100 in reverse, and control the car pretty well - I suspect that might not be 100% true to the original!).

I've given the car 8 paint colours - the 7 available on paper for the Standard sedan and also "Canary Yellow", as is popular with some other taxi companies around the world (and indeed, in Melbourne in modern times). It was also possible to have your car painted pretty much any of the colours available to the three models. The official colours listed for the EH Standard were:

for that list. The hardest job I had with the colours, was trying to find photos of cars in a couple of the more obscure ones - I could not find a picture of either of the greens, so I kind of made them up. If anyone knows what they should actually look like, I'd be pleased to see a picture!

Information on the Holden EH:

If you want to modify this car, my only request on the work I have done is that you give me credit, and since I haven't been able to contact Aussie Muscle or Alex Isaac, I don't speak on their behalf.