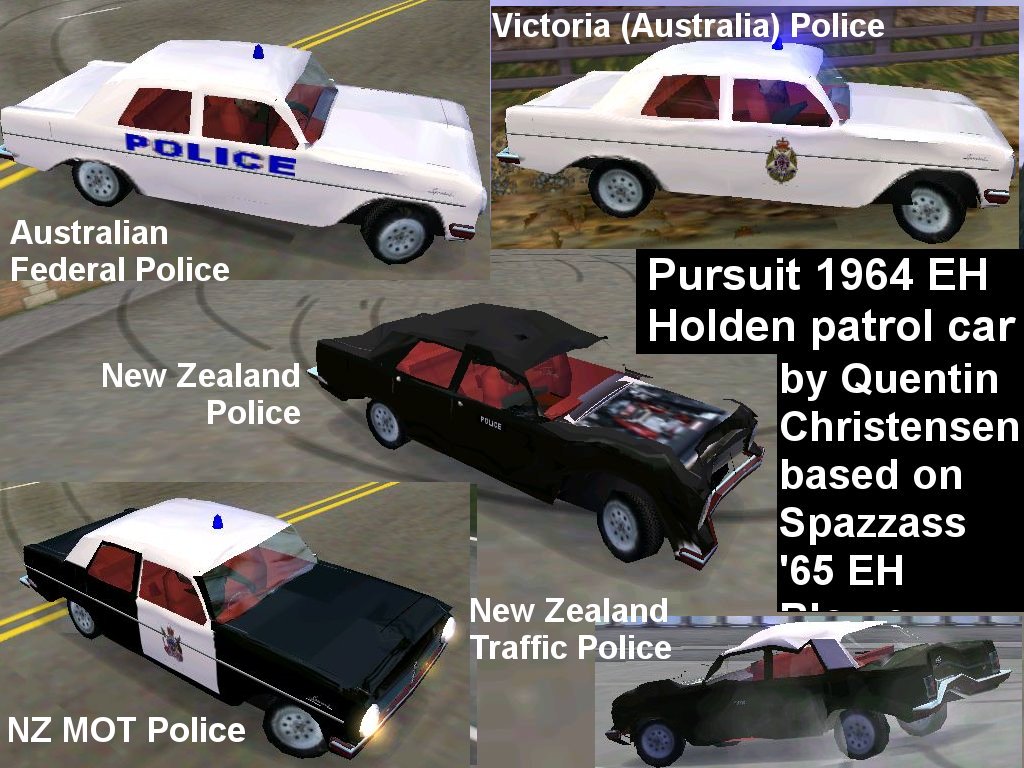 I've tried to turn Alex's blown and lowered 2 door EH 'back' into a more stock 4 door EH. I've also given the car Special badging, chrome strips, a two tone paint job and damage. This police version contains a flashing blue roof light, and (optionally) police decals from different Australian and New Zealand police departments. I started to make a dash view, but I just couldn't get the hang of it, so I apologise for it's lack of inclusion.

with 34 triangles and 18 vertices being used in the convertible part.

After trying to make the carp more realistic in the 'street' versions of this car, for this patrol car, I've tuned it up a bit again - it's still got a three speed gearbox, but you shouldn't have so much trouble catching the class B baddies in this cruiser.

The different skins included are:

car00.tga - Every car must have a car00.tga file in the car.viv, it is the police skin used on many of the tracks (like Hometown and Kindiak park) and also used on the 'foreign' tracks if you don't have the appropriate country TGA file.

This Victoria Police livery is similar to that used around the time. I couldn't find a picture of an EH, but I found a 1964 Studebaker with just the light on the roof (and a siren on the bonnet which I didn't model), with no other police markings or decals:
http://www.inthejob.com/viccar2.jpg
I also found a slightly later model Kingswood with Victoria Police markings, which is closer to what I've modeled:
http://www.inthejob.com/vicjimkingswood.jpg

New Zealand police car. Note that the roof light on my car is blue rather than red:
http://commons.wikimedia.org/wiki/File:1963-1965_Holden_EH_Standard_sedan_%28New_Zealand_Police%29_01.jpg

This is a slightly later New Zealand Ministry of Transport Police livery than the Germ.tga below, but could pass for a US "Black and White" cruiser.
http://www.111emergency.co.nz/J-M/MOT3.htm

This car is based on a HR Holden used by New Zealand traffic police:
http://holdenpaedia.oldholden.com/index.php/Image:NZ_HR_Police.jpg


aus.tga - very disappointingly, I've never found a track this works on and I *have* the Australian version of the game. If anyone knows how to change the country code of a given track, please E-Mail me!

This livery is an Australian Federal Police livery:
http://www.inthejob.com/ACT%201980%20New%20sticker.jpg

Particular thanks to:
http://www.inthejob.com/ for the Australian picutres and
http://www.111emergency.co.nz/ for the NZ pictures.


Information on the Holden EH: