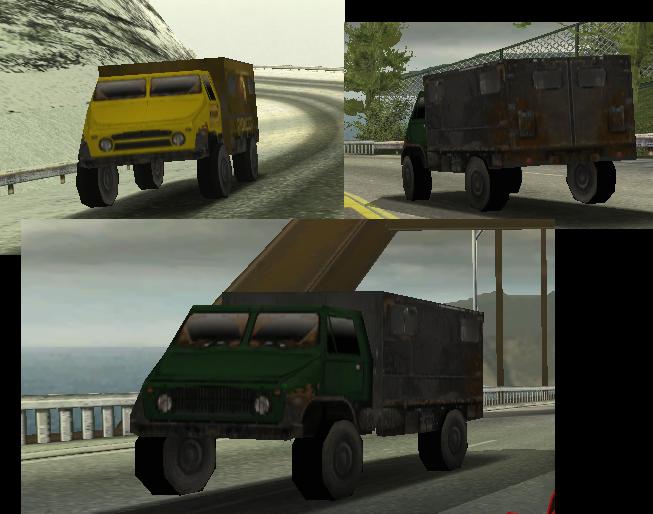 The Unimog truck that has appeared in NFS II, III, High Stakes (PSX) and Porsche 2000. I just really wanted to have it as a traffic vehicle so I converted it.
It turned out to be way harder than I expected since the original model relies a lot on the alpha of its textures. Car textures in HP2 have no alpha transparency so I had to edit the model and cut some parts of unused polygons off.
I had plans to replace all traffic cars with NFSIII ones but that seems quite hard now :/
Of course, this one is really low poly and pixelated but you don't really notice when you pass it at high speed.
It has 4 textures: green from NFS III, purple (edited from the NFS III one but the color appeared in NFS II), yellow from NFS II (Proving Grounds track) and light blue with logs (NFS 5, Black Forest track from the PC version).
But I'm not sure if all show up in the game though, I've never paid much attention to traffic vehicles. I mean if you try to replace the truck to drive it yourself you see all the textures but Idk if traffic cars can load any of them randomly or what.