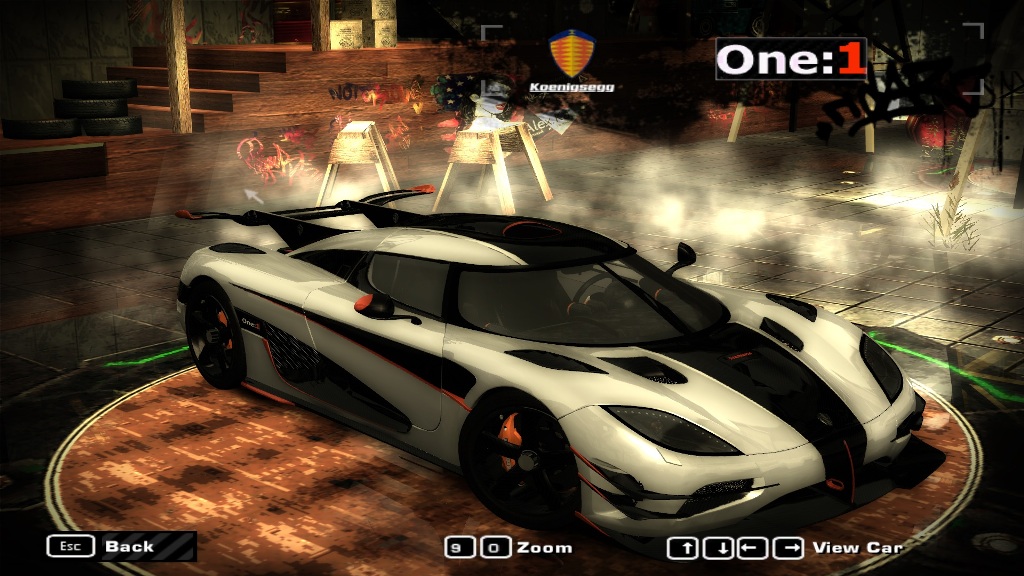 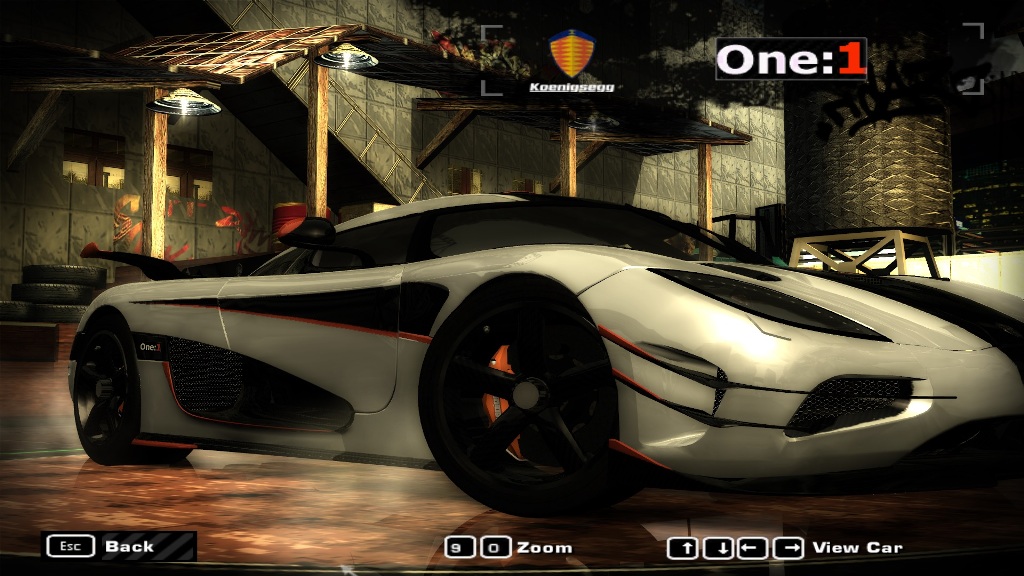 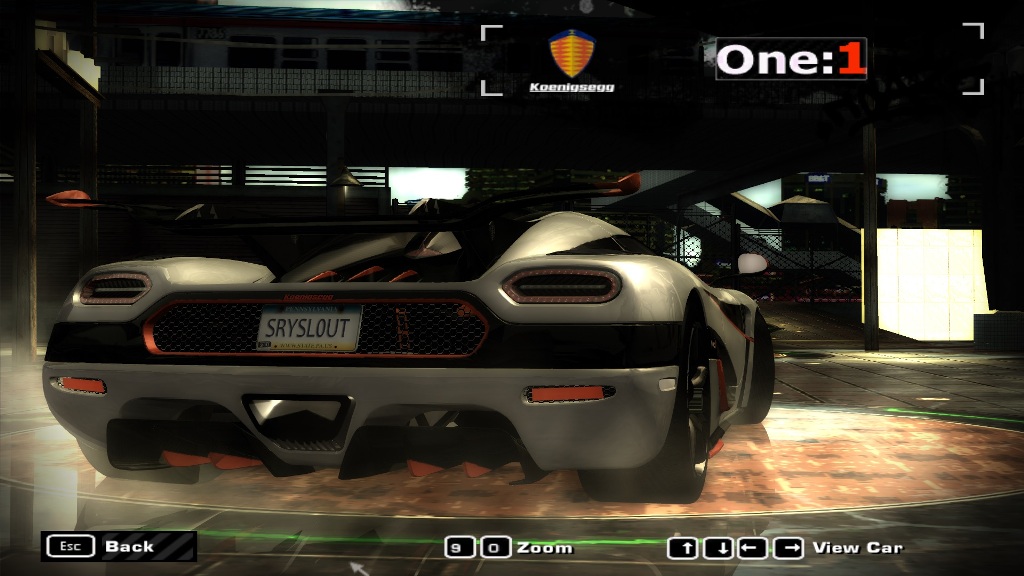 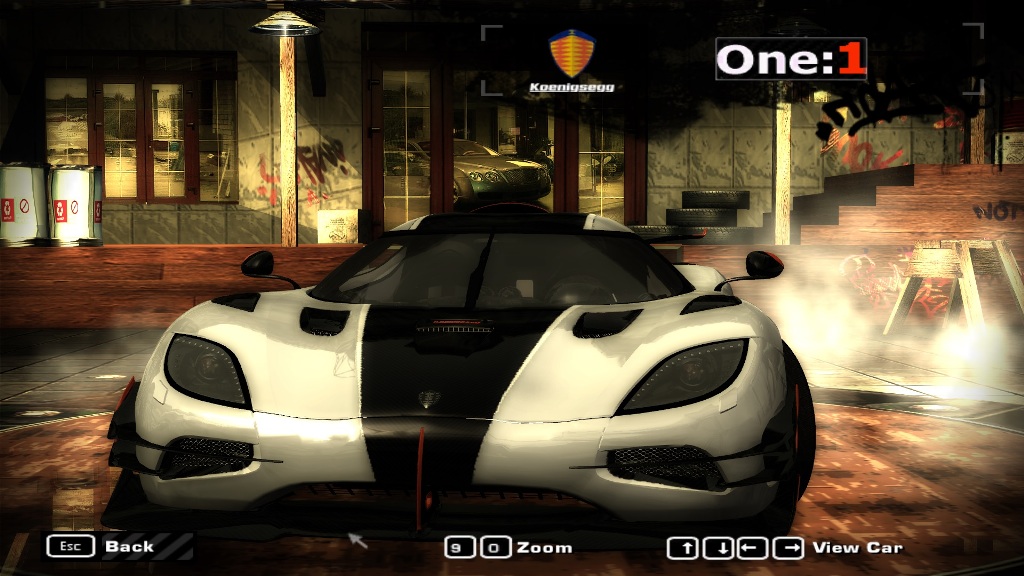 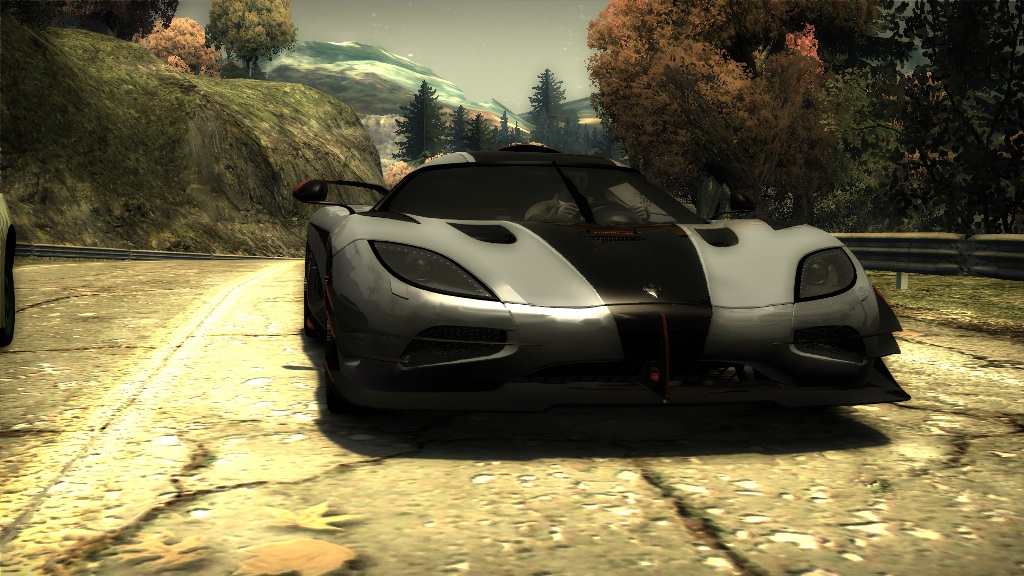 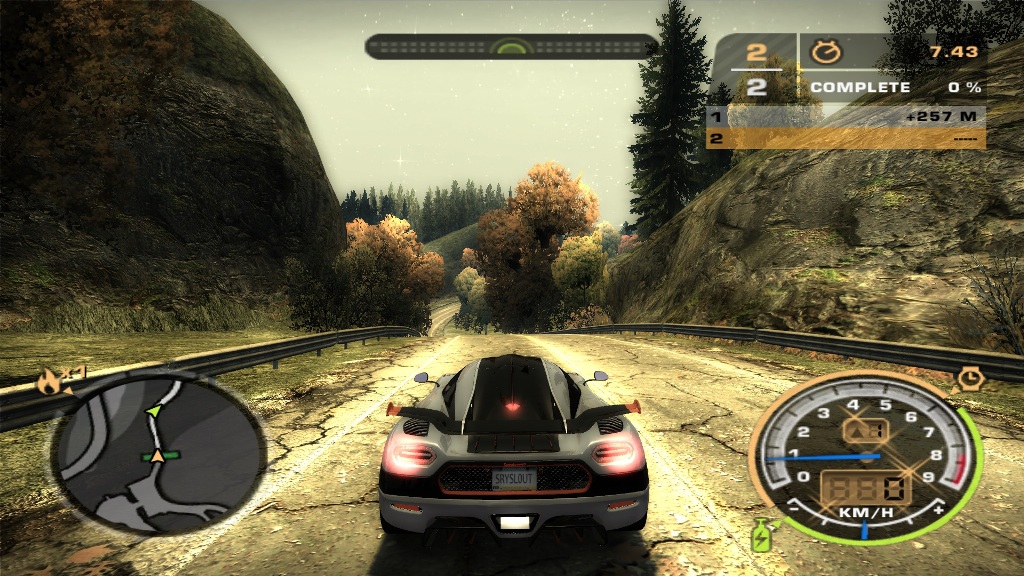 Hy guys.
I saw this car for the first time in NFS Rivals and I liked it so much that I absolutely
wanted to see it in MW. 'Cause IMHO MW has better physics and, despite the fact that
it is an older game, it is much more fun to play!
So now, after about ten days of hard work, I'm proud to present you my first totally independent work.

This car is basically an improved version of the Agera R. The One uses a giant 5 liters twin turbo V8.
Through large use of carbon fiber, the tecnicians managed to lower the car weight to just 1360 kg.
But the interesting thing is that the engine develops the ridiculous power of 1360 cv.
So this is the world first production "mega car"… because 1360 cv = 1000 kw = 1 MW.
This car has 1 Megawatt of power!!! To make you understand how much 1 Megawatt is, take into consideration
that, for example, a BF 109 aircraft of WW2 had fewer power (UPDATE: at the beginning of WW2, the Messerschmitt had the power of just 474 KW - Bf 109B-1 - but the latest peaces produced in 1944 - Bf 109K-4 - reached the power of 2000 cv = 1,47 MW. However, the majority of the pieces that were produced had the power of 1200 cv = 0,882 MW).
This is a missile… basically a giant engine mounted in a (very) aerodynamic frame.
Anyway, the name comes therefore from two facts: power to weight ratio is 1; and the car has 1 MW of power.
Reguarding the aesthetics, it could be said that the spoiler and the frontal small lateral wings, besides
improving the downforce, make it look much more "nasty".
Interesting fact is that on the market there are other cars with giant V8 engines, like the Chevrolet
Corvette (5.7 liters), but they have less than half the power.
This car is capable of reaching the ridiculous speed of 436 km/h = 272,5 MPH (UPDATE: not jet officially tested). So, the performance in game seems
fake but it isn't indeed, 'cause the car really accelerate and goes so fast!
There's one thing that I wasn't able to understand: if this car has no sidelights and those cutting small
lateral wings, how could it gain regular street use approval?

PARTS THAT CAN BE CUSTOMIZED:

- All the people that want liveries, who had already the car installed, will need to reinstall it
from the beginning, because there have been changes to the ATTRIBUTES.MWPS

- The sound of the Bugatti Veyron (included), kindly provided by TerraSphere_385, is IMHO the best for this car.
If you want to use it (instead of the original Pontiac GTO sound), make first a backup of your NFSMW\SOUND\ENGINE folder and then copy and
overwrite there the four files CAR_28_ENG_MB_SPU.abk, GIN_VR6_Jetta_M3.gin, GIN_VR6_Jetta_M3_DCL.bin, SWTN_CAR_28_MB.abk.
Lastly edit the file NFSMW\ADDONS\CARS_REPLACE\GTO\ATTRIBUTES.MWPS: uncomment the 2 lines << #patch int32 bin:0x31ce4 0x3f7db81a" >>
and << #patch float bin:0x38fac 0x3f7db81a >> (remove the "#" character at the beginning of the lines) in the "engineaudio" sections
and save it.

- The real weight distribution of the car is 44% front and 56% rear. However the game seems to handle this feature with too much emphasis.
So, if you want an easier drive experience, you can modify this value in the sections "FRONT_WEIGHT_BIAS" of the file (there are 2 of this sections,
one for stock and one for modified car).

- To avoid the game crashes when on selection screens and sometimes at the beginning of races, and also
strange texture distortions, due to the big size of textures used, I've found a solution that works
perfectly, but that involves the use of a (freeware) third party little program.
So, basically, this solution comes at the price of loosing the possibility of running the game through one
single click. Four clicks will be needed every time.
I know that many people (like me) already use this little program to load big texture packs in the game…
but the others will have to decide.
Well, the program is called "uMod" (I use version r44) and you can download it here:

This is the procedure to avoid game crashes (and to gain 5 more liveries):

Go to the folder NFSMW\ADDONS\CARS_REPLACE\GTO\ and rename the file textures.bin to textures.bin.full or
texture.bin.old, or how do you prefer.
And rename also the file geometry.bin to geometry.bin.old.
Then, inside the zip you'll also find a folder named CRASH_FIX.
Inside this folder you'll find another copy of the textures.bin (1133383 byte) file: extract
it to NFSMW\ADDONS\CARS_REPLACE\GTO\.
And you'll also find another copy of the geometry.bin file (50667520 byte - it is huge, I know.
This happens because the use of bodykits implies the multiplication of several car parts):
extract it also to NFSMW\ADDONS\CARS_REPLACE\GTO\
Then start the game through uMod (Main–->Start game through uMod (with command line)–->speed.exe–->-mod)
and load the texture pack Koenigsegg_Agera_One_2014.tpf that you'll also find inside the folder CRASH_FIX.
In uMod press the button Update, save a template and make it the default for your ease.
In this way, basically, the game doesn't crash because the big textures are loaded in an area of the video
memory that's far from the one used by its graphical engine.
And, the car will also have 5 bodykits, through which 5 different liveries will be selectable.
If someone asks me why didn't I add these liveries also for the normal game-crashing version of the car,
well, the answer is that, using liveries, the resulting texture file is so big that the game crashes always,
making it impossible to play with the car.

- There are small imperfections here and there; I made my best to fix the model. However, I think that it isn't so easy to notice them.
- The car is sometimes not well loaded from the game's engine. In this case it appears transparent. This is a problem due to the high poly count
and textures size. It depends on how many hy-poly cars are already installed. If it happens to you, please be patient, reduce the number of opponents and reload the race. Or apply the proposed solution.
- update 20/09/2014 00:05 –-> corrected plastic parts textures and inner rims.
- update 20/09/2014 23:52 –-> corrected interior texture mapping (carbon fiber)

CREDITS GO TO :
- Electronic Arts for making a game that after 10 years is still the best arcade racing
- Koenigsegg for making this astonishing car (–-> http://www.youtube.com/watch?feature=player_embedded&v;=znkZyQLW5Nc <–-)
- ACL for directing me to the 3D model
- TerraSphere_385 for the wonderful sound
- Racer_S for NFSMW Camera Hack, that's wonderful
- To the makers of Zmodeler 1 & 2, and export filters
- arushan for nfsmw-modtools
- nfsu360 for NFS Textures Compiler
- To the makers of uMod and Texmod, for giving us the possibility of easily and permanently
replacing textures
- me