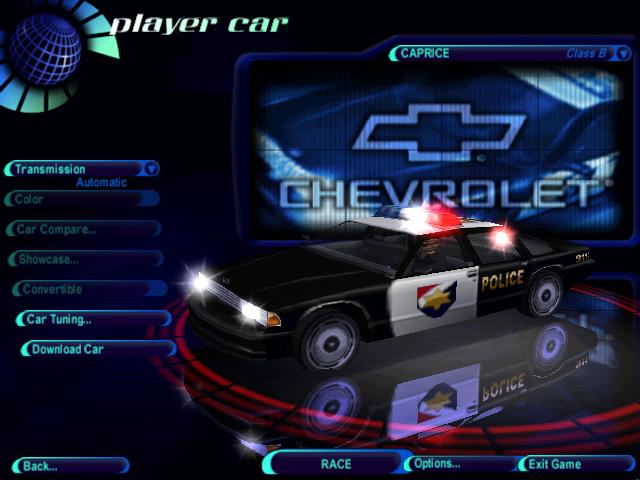 I was inspired by Rich P. to do my version of the PSX version of the Caprice and it is made from scratch, this car was going to be at police garage but due its shutdown it is here for NFSCars. It has alot of accurate details including textured lights with the correct lighting pattern, textures and vidwall ripped from the actual ISO, as well as damage like in the PSX version, PSX version style dash view, and cop that stays in the car when ticketing or arresting speeders like in the PSX version. Credits go to PorscheMD11GT for the prisoner partion, Snailrush for PSicture, Addict for vivedit, Olega for Z-modeler, Dodgeboy for the performance, XJ220 for helping me out with the textures and EA for both versions of High Stakes. This car is in the B class due to the fact in the PSX version this car only chases the Z3, Camaro Z28 and Firebird Trans AM since they are in that class in the PSX version and the AI driving this car in the PSX version also chases the Ford Falcon XR8 and Holden HSV VT GTS in the Australian version. This car also includes a Righthand drive version but the original car.viv has to be renamed CarLeftHand.viv while the CarRightHand.viv has to be renamed Car.viv in order to use that version. This is the second version of the car and btw no requests like convert this from the PSX version which its impossible to do due to the fact its GEO format differs from NFS II/SE for the PC and also I will recreate any car I like I will get to the others someday. New changes include the correct shape like the original PSX model and also the shield was mirrored incorrectly.