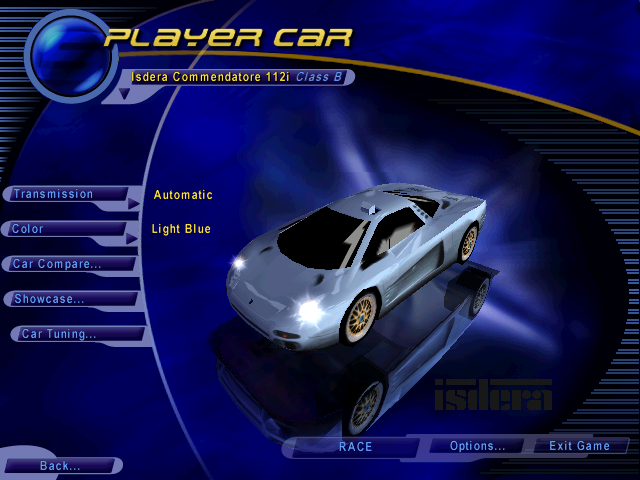 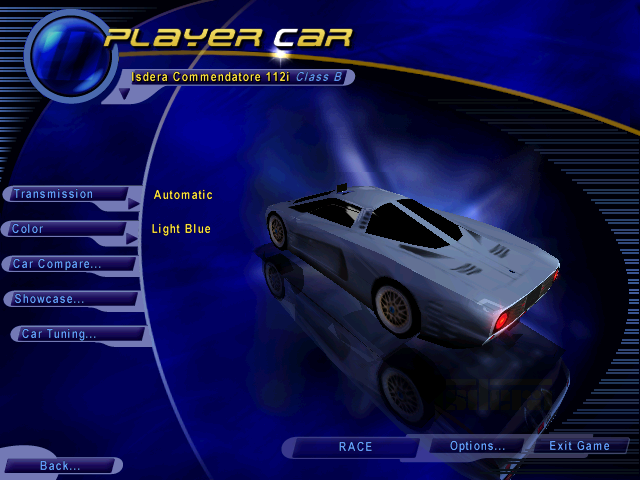 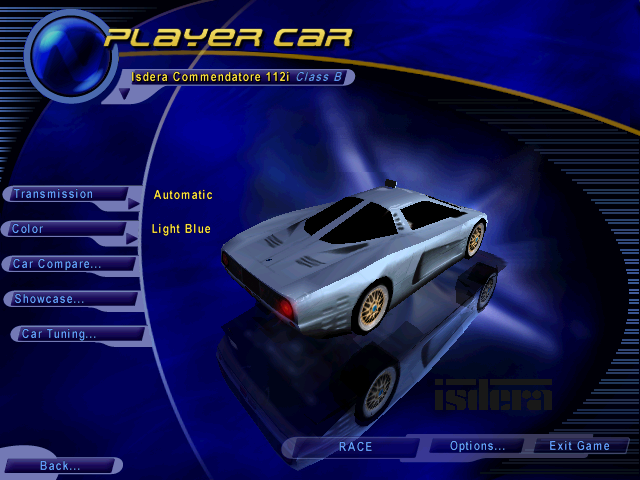 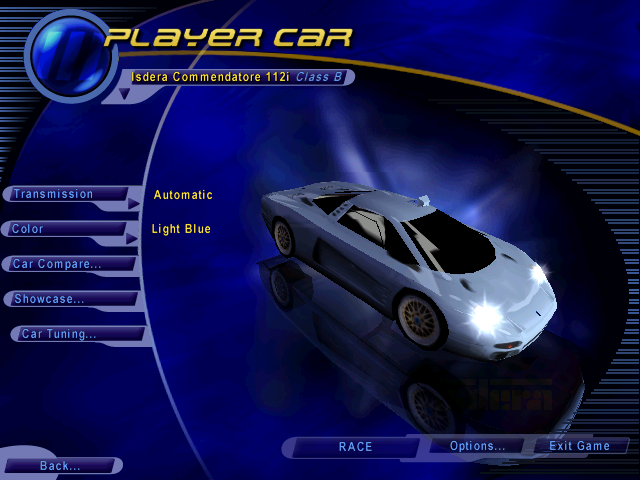 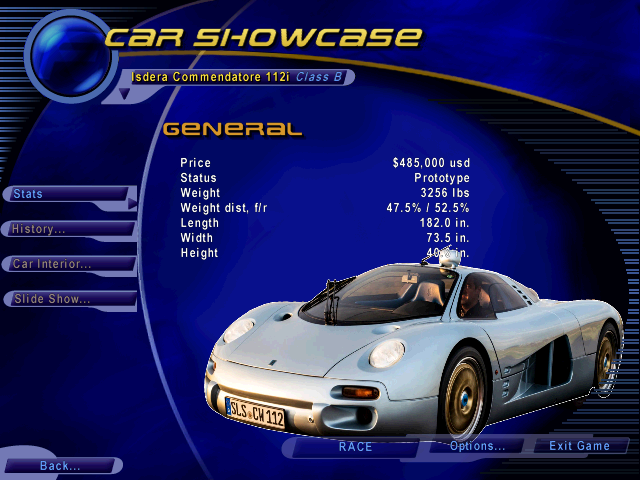 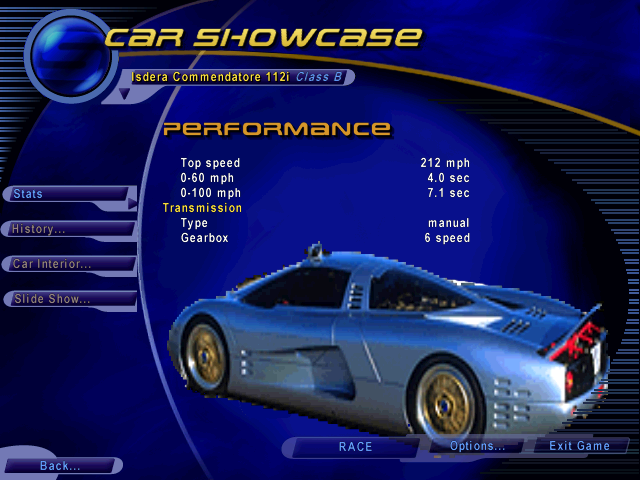 This is Ryuji's Beautiful Isdera Commendatore 112i A German Prototype Supercar Is Now Avaliable In Need For Speed III Hot Pursuit This Model Is Not Mine It Was Made By Ryuji Kainoh So I Give Credit To Him
[HISTORY] Isdera Commendatore 112i After the Imperator 108i had ended production in 1993, Isdera was working on the development of a new model. In 1989, the first clay models took shape and development work was carried out through 1993. The new car called the Commendatore 112i was named in honour of Enzo Ferrari (Ferrari was awarded the title Commendatore II). Commendatore means Knight Commander in Italian language. The sleek design drew inspiration from the famous Group C race cars. Eberhard Schultz, the company's founder, engaged engineers and technicians from Mercedes-Benz with approval from the company in the development of the car. The 112i had a 6-speed manual transmission built by Getrag—transferring power to the rear wheels—which was shared with the Porsche 911 Turbo, the ABS brakes (which measured 330 mm (13 in) and the front and 305 mm (12 in) at the rear) and the suspension system were shared with the Porsche 928 while the head lamps were shared with the Porsche 968. The car has handbuilt body work on a tubular steel spaceframe chassis and has 18-inch gold BBS alloy wheels wrapped in tyres measuring 255/35 ZR18 at the front and 295/35 ZR19 at the rear. The large side intakes help cool the engine. The engine was a 6.0-litre Mercedes-Benz M120 V12 unit (first used in the Mercedes-Benz C112 and later used in the Mercedes-Benz SL600 AMG and the Pagani Zonda S). It was especially modified to cope with the manual transmission. The modifications included an in-house developed flywheel and a Bosch ECU. The engine generated a maximum power output of 414 PS (304 kW; 408 hp) at 5,200 rpm and 580 N⋅m (428 lb⋅ft) of torque at 3,800 rpm. The 112i had advanced technologies at the time, including gull-wing doors, a gull-wing engine cover for easier access to the engine, a velocity sensitive chassis which lowered the car by 76 mm (3 in) at high speeds, an active suspension system and an electronically controlled airbrake. The 112i retained the periscope rear view mirror from the Imperator 108i instead of conventional side view mirrors. It has a flat underbody and the windshield wiper from a bullet train for improved aerodynamics. The long tail of the car also improved airflow over it. The airbrake raised in an upright position while braking acting as a wind deflector to help slow the car down (similar to a parachute). The car had a drag coefficient of Cd=0.306 when tested in the Mercedes-Benz wind tunnel. The interior of the car was mostly custom made and contained two tone blue and black leather upholstery along with RECARO leather sports seats. The car had wide door sills which housed the two fuel tanks. The dials and other instrumentation (excluding the steering wheel which was from OMP) were from Mercedes-Benz and the speedometer read up to 400 km/h (249 mph). Isdera planned a limited production run of the 112i like its predecessor and quoted that each car would take six months to complete. The car was not functional when it was introduced. The development of the car reportedly cost a total of €4,000,000. This combined with the ongoing economic recession pushed the company into bankruptcy shortly after the car's introduction. The company was then bought by Swiss investors under whom Schultz completed the car in order to make it driveable on the road. Six years later, the car was updated and renamed to "Silver Arrow" by a Swiss businessman. On the exterior, the updated car had conventional side view mirrors and had silver five-spoke Mercedes-Benz alloy wheels instead of the gold BBS units. The engine was a 6.9-litre Mercedes M120 V12 unit, which generated a total of 619 PS (455 kW; 611 hp). Interestingly, there was no Isdera badging on the car and it had Mercedes-Benz badging instead. The Silver Arrow was unveiled at the 1999 Frankfurt Motor Show
[SPEC] The Isdera Commendatore 112i Had 6.0 L Mercedes-Benz M120 V12 Engine They Can Get 0-60 In 4 Seconds And Top Speed Of 341 Km/h Or 212 Mph Whiles Silver Arrows Commendatore 112i Had 6.9 L Mercedes-Benz M120 V12 They Can Go 0-60 In Less Than 4 Seconds And Top Speed Was Faster Than Normal Isdera Commendatore 112i Does 370 Km/h Doing Test
[PRICE] The Starting Price For Isdera Commendatore 112i Is 485,000$ Today A Price Is Incrase To 4,000,000$ In Todays Money Very Few People Manage To Get Isdera Commendatore 112i Like This Swiss Multi-Millionaire Businessman Albert Klöti Who Bought Isdera Commendatore 112i For 1,500,000$ In 2000 And Sold In 2005 However The Sold Failed And It Was Sold Again In 2010
Source For Data: Wikipedia
If You Want To Convert Ryuji Kainoh Car To NFS3 You Will Have A Permissions From Ryuji Kainoh If You Don't You Have To Give Credits To Him
If You Where To Comment Please Write Appropriate Comment
This Was My Favorite Car I Will Not Hated The Car Forever